Two of the early explorers to the area were Franciscan Catholic Priests. In 1776, Father Atanasio Dominguez and Father Silvestre Velez de Escalante traversed this wild country in their pursuit of a trail to reach the Pacific Ocean. The Domínguez–Escalante expedition was a Spanish journey of exploration conducted in 1776 by two Franciscan priests, Atanasio Domínguez and Silvestre Vélez de Escalante, to find an overland route from Santa Fe, New Mexico, to their Roman Catholic mission in Monterey, on the coast of modern-day central California. Domínguez, Vélez de Escalante, and Bernardo de Miera y Pacheco, acting as the expedition's cartographer, traveled with ten men from Santa Fe through many unexplored portions of the American West, including present-day western Colorado, Utah, and northern Arizona. Along part of the journey, three indigenous guides of the Timpanogos tribe (Ute people) aided them. The land was harsh and unforgiving, and hardships encountered during travel forced the group to return to Santa Fe, New Mexico before reaching Las Californias. Maps and documentation produced by the expedition aided future travelers. The Domínguez–Escalante route eventually became an early template for the Old Spanish Trail, a trade route from Santa Fe to Pacific Coast settlements." 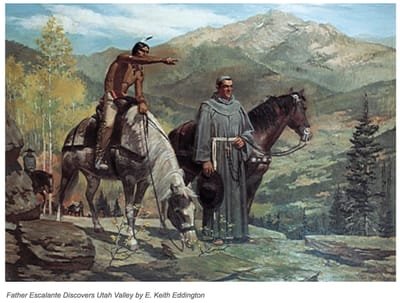 Several explorers came after the Escalante and Dominguez expedition, such as Jedediah Smith, John Fremont, and Jim Bridger, to name a few. Each added to the body of knowledge needed to face the challenges in the mountains of the West. Much information was passed on to Brigham Young as he prepared the exodus from the United States to the Great Salt Lake Valley.