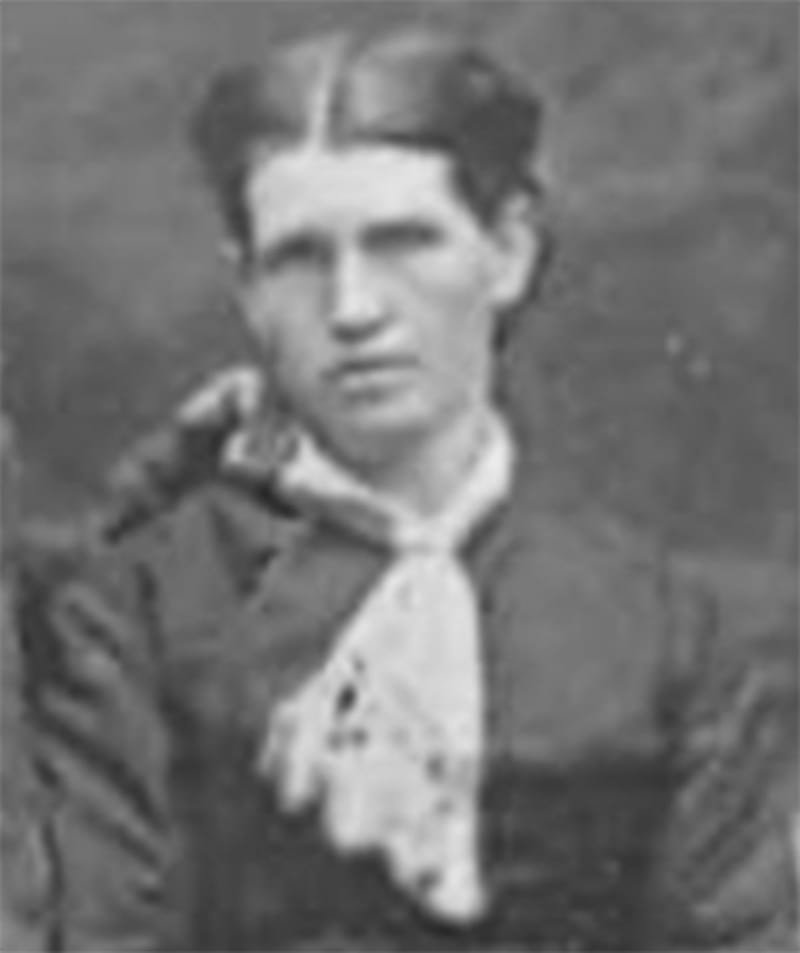 Manomus Lavina Gibson Andrus was born in Monroe County, Mississippi, on 10 March 1842. When she was five years old, Manomus and her family were driven out of Mississippi by frenzied mobs, then joined the exodus to the Great Basin in today's state of Utah. Along the way, her father became seriously ill, forcing a stop at the place they called Pueblo. The family stayed there one year until the next train of pioneers came along, which the Gibson family joined, arriving in the Salt Lake Valley in the year 1848.

Although they had nothing, their father was a competent carpenter who built his family a log cabin in the mountainous Big Cottonwood. A number of families lived at Big Cottonwood who together built a log room for a schoolhouse then hired a man to teach their children. Manomus attended school off and on as she could, receiving an education of about one year.

The Gibson family often lived on a diet of greens and roots of weeds, but they also raised a little corn kept for cornmeal bread. They seldom tasted white bread and when they did it was considered a great treat. When she was very small, Manomus worked out in the field planting corn and gleaning wheat, then continued working most of her early life to help her parents. She was paid one dollar and fifty cents a week, but because cash money was scarce, she would also get paid in flour.

At the time of the grasshopper plague, Manomus recalled how the insects came in like a rain cloud. As the large mass grew nearer, the insects dropped to the ground. Horrified, the people thought for a moment that the Lord had abandoned them, and they used long sticks fixed with a small board on one end to attempt to kill the bug-eyed creatures.

Manomus lived with her parents until she entered plural marriage as a second wife to James Andrus. Called to relocate to southern Utah, they first settled in the small village of Grafton, living amongst hostile Native Americans who often stole their animals. Two years after their arrival, James returned to Salt Lake for ammunition and while he was gone, Manomus, along with the other settlers, had to move into Rockville for protection. Manomus suffered the loss of two children with scarlet fever who both died after being exposed to the open air too long. After residing Grafton for five years, Manomus moved with James to the Canaan cattle ranch, fixing meals for about 15 ranch hands while she lived in a wagon box waiting for a house to be built. After 15 years, Manomus moved to St. George to live out her years.

Manomus’ greatest childhood desire was to be a good housekeeper, which indeed became her life’s work, as well as raising a family. She did not hold many prominent public positions, but she did serve as president of her local Primary for a year and as a Relief Society teacher while she lived in St. George. As a long time widow, Manomus lived to be one of the oldest pioneers, passing away at the age of 98.