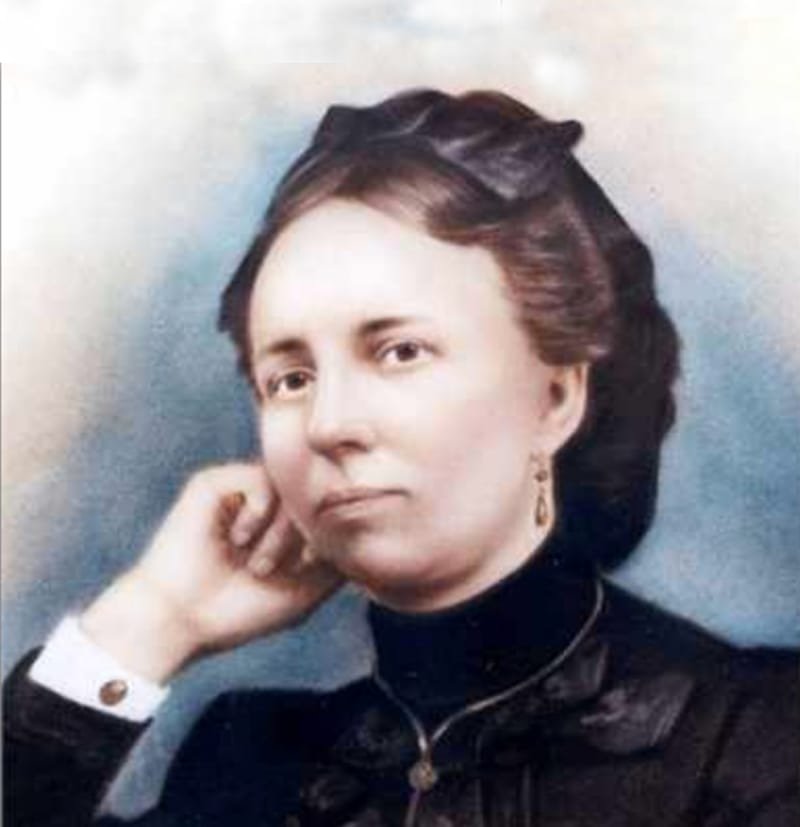 Olive Carter Foss was considered a beauty, with her dark hair, her dark eyes, and her olive complexion. Rather small, Olive was the youngest of seven children belonging to Calvin Foss and Sarah Brackett Carter of Scarborough, Cumberland, Maine. Unfortunately, Olive’s father passed away about six weeks before she was born. Her mother, Sarah, along with the other children, moved back in with Sarah’s parents, where Olive was born on 12 April 1835. Olive’s mother never did remarry.

When Olive was two years old, Wilford Woodruff, an apostle for the Church of Jesus Christ of Latter-day Saints, came to proselyte in the area. Olive’s Aunt Phebe joined the Church, then moved to Kirtland, Ohio, where she married Wilford Woodruff. So, Woodruff was Olive’s uncle when he came preaching. All her family joined the church, except for her older brother Ira, who did not accept it. In 1850 when Olive was about fifteen years old, Wilford Woodruff returned to Maine and encouraged the family to join him and 100 other saints on a journey to Utah to be with other members of the church.

When the saints in Salt Lake City heard of the nearing immigrant train, men were sent out to assist them and among this group was a young man named Franklin Benjamin Woolley. Immediately drawn to the dark haired, black-eyed girl from Maine, Franklin said, “I’m going to marry that girl someday.” The Woodruff Company, including the Foss family, reached Salt Lake City on 14 October 1850.

Always well groomed, Olive loved beauty, culture, and order. She was popular among the young people of her set, and because Olive and her sisters were schoolteachers, she obtained a splendid education for those early pioneer days. Although she and Franklin Benjamin Woolley lived in different wards, a sincere friendship developed between them, which later flowered into a romance well known in Salt Lake City’s early history. Franklin’s cousin, Della Woolley Eardley, said of him, “He was the outstanding Woolley boy in looks and accomplishments.” Franklin and Olive married 11 February 1857.

They had a son in the first year, which they named after Franklin. Then they had another son, Edwin, named for Franklin’s father, but infant Edwin died  in 1859. Their daughter Ida Foss was born 10 January 1861.

Franklin’s father, Edwin D. Woolley, was engaged in many enterprises, such as farming, merchandising, missionary work, as well as freighting merchandise from the east, company clerkship, newspaper and telegraph work, and acting as private business secretary to Brigham Young. Franklin worked as his assistant, but he never missed an opportunity to attend school. Soon Franklin owned a nice home, comfortably furnished, a small farm, and had steady employment as tithing clerk in the general church tithing office.

When Brigham Young called families to relocate to the Dixie area, Franklin and Olive were included. They sold everything and moved south in the spring of 1861 to Duncan’s Retreat, now known as Virgin City. Their son, Franklin Jr. was about four and Ida was a baby. With no house to live in and no tents, they piled bedding and a limited amount of food into in a covered wagon.

It rained constantly for nearly 40 days, making the red, sticky mud nearly knee deep. Cooking over a campfire and making beds in a wagon box in such wet conditions was miserable. Eventually, they moved to St. George where they built on their lot a two-story house made of adobe bricks, and a barn, planted fruits, grapevines, a vegetable garden, and flowers. Later they bought four lots in the northwest part of town known as the Sand Lots and planted apple, pear, and peach trees as well as grapes.

Franklin owned several teams of horses and mules, wagons and equipment and kept them busy freighting. He opened the St. George tithing office and was tithing clerk for several years. Olive and Franklin had five more children for a total of eight—Jedediah, Samuel, Ezra, Eva, and Effie Dean. Samuel and Eva died as babies.

On 9 April 1868, Franklin entered into plural marriage with 19-year-old Artimesia Snow, the daughter of Erastus and Artimesia Snow. Olive was 14 years her senior. Olive’s mother never remarried, so Olive had never before experienced living in a polygamist home.

At the instigation of Erastus Snow, in 1868 the St. George Co-op Store was organized, and Franklin became a stockholder. He also held stock in Z.C.M.I. of Salt Lake City and in the cotton factory at Washington that weaved cloth from Dixie cotton and wool grown in St. George. From the fabric, tailors crafted men’s suits.

In February 1869, Franklin was commissioned to travel to California to obtain merchandise for the co-op. On the return trip, a mule wandered off and Franklin scoured the area to find it. Indians on a rampage after an unjust killing of one of their own men found Franklin, then took out their revenge on him. Days later his dead and emaciated body was found full of arrows.

Edwin had the sad task of bringing Franklin home to his family. When the first teams arrived in town, they were met by Franklin’s children who rushed up to the wagon asking for their daddy, expecting to be taken into the wagon for a ride home. One of the teamsters said to eight-year-old Ida, “Your Dad didn’t come home this trip.”

The children rushed home where Franklin’s wives, Olive and Artimesia, were preparing a big dinner in honor of his return. They told their mother that daddy hadn’t come home. Franklin’s death was a terrible shock to Olive, and since she was not allowed to see the deteriorating body, it took her a long time to accept the fact that her husband was gone. The family tells that Olive set a place for him at the table until she died. Ironically, Olive and Franklin were known for their generosity, especially their charity and kindness to the Indians.

At the age of 33, Olive was a widow with five children between the ages of 12 and 8 months. Franklin left her with a good home, a team, and investments in land, fruit trees, a factory, a store, and a co-op. In addition, Brigham Young presented Olive with a splendid team of mules. She and her 12-year-old son, Franklin, freighted produce, molasses, fruit and other products between St. George and Salt Lake City.

On each trip north, she purchased goods for the St. George Co-op and drew her dividends in sugar, spices, cloth, shoes, candy, rice, nuts, Christmas toys, etc. and freighted them back to St. George. She arranged one of her upstairs rooms as a store room and made a large chest with compartments to hold her commodities.

Olive, like most New Englanders, was a splendid weaver of Jean cloth and she sold enough to buy 2.5 acres of land on the Santa Clara Creek where she built a small house on the sand lots and hired a Swiss man to care for her orchards and vineyards. She dried apples and pears and pickled grapes to sell up north.

She had one of the first organs in St. George and Ida was taught music by one of their neighbors, becoming the organist for the 3rd Ward. Olive did beautiful handwork and made lovely baby dresses for her grandchildren. They were a yard long with ruffles of embroidery, rows of tucks, insertions, and yokes. The sewing looked like machine work. However, Olive had most of her personal sewing done by Anna Ivins, mother of Apostle Antone Ivins

Olive bought a white marble headstone for Franklin and a similar one for herself.

Her home was a model of neatness. Her walls were all plastered and papered. She had “States” carpets on her parlor floors and homemade carpets on the other floors. Her kitchen was white washed and had built-in cabinets. Her furniture was mostly heavy walnut; her wood was done in oak graining by Brother Milne, who was an expert grainer. She built a rock wall around her property about 2-1/2 feet high and 1-1/2 feet thick. Franklin had planned this wall, so she could not rest until it was completed according to his plans.

Olive furnished one room upstairs for a playroom for her children. Here Ida and Effie had a real cook stove that would burn real wood chips. They also had tables and cupboards made by Gordon Woolley. They had dolls, doll buggies, and play dishes. She always encouraged her children to bring their friends home to play. John G. McQuarrie, who grew up in the neighborhood said to Ida’s daughter, “Your grandmother was known for her gentle breeding, and refinement, her good taste in dress, her good grooming, her well-supplied table, and her love and sympathetic understanding of young people. I was always trying to think up excuses to take me into her home, because it was so neat and nice. She always had cookies or something for me, and she was never too busy to talk with me.

Olive had many friends. Among them were Brigham Young, Erastus Snow, Daniel Duncan McArthur, Israel Ivins, James G. Bleak, Rassie W. Snow, James Andrus, Walter Dodge, and Brother and Sister Townsend. Olive’s husband and James G. Bleak used to be like brothers. After Franklin’s death, Brother Bleak was always a good friend and wise counselor to Olive. Her children loved and respected him as a father.

The question might be asked, “Whatever happened to Artimesia, Franklin’s second wife?” She lived with Olive and her children for several years. She did not have any children by Franklin. Artimesia is found on the 1870 Census living with the Woolleys in St. George. On April 16, 1873, she became a plural wife of Daniel Seegmiller. His first wife, Ellen, died in 1879 and Artimesia raised Ellen’s seven children who were between the ages of thirteen and two. Daniel Seegmiller had a third wife, named Emma, as well who gave him five children. In the 1880 Census Daniel and Artimesia were living in St. George, but in 1900 Artimesia was living as a widow in Kanab of Kane County, Utah. She was a widow for 25 years before she died.

In March 1876 Olive brought her family to Salt Lake City to go to school. Frank, Jr. and Ida attended Miss Cook’s school for a short time and then attended the University of Deseret. Jed and Ezra worked as errand boys for the Z.C.M.I. and attended school part time. In April 1877 Olive was suddenly taken ill and passed away. She was buried in Salt Lake City.

When school was out in the spring, Frank Jr. took the family back to St. George. He returned to retrieve his mother’s body and had her buried in St. George beside her husband. At the time of Olive’s death, Frank was 19, Ida 16, Jed 14, Ezra 11, and Effie 8. Frank and Ida never returned to school, but stayed home and acted as parents to the younger children. Frank and the other boys ran the farm and kept the teams busy managing with what little income they had. Ida kept house for them all for eight years until she was married in 1883. Their industry is a tribute to them and their upbringing by their mother. Olive set a good example for them of fortitude and can truly be called one of the great Pioneer women of Utah’s history.