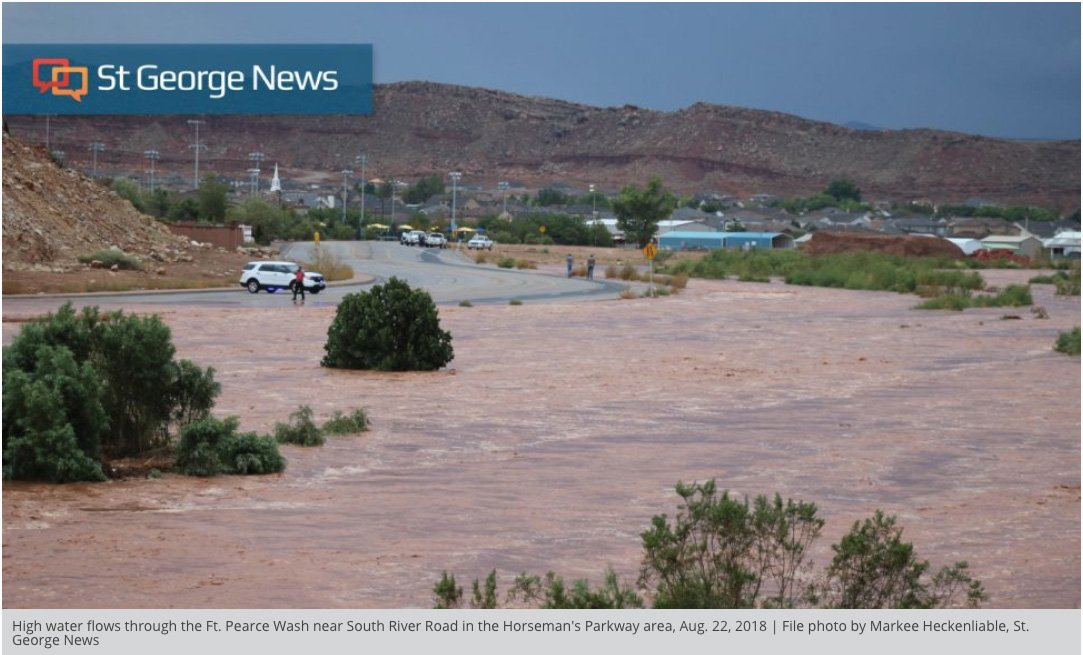 The first settlers entered what was to become St. George on November 30, 1861, with the main group arriving the following week on December 4, 1861. These men, women and children gathered where Dixie State University is now located to wait for the completion of the town survey and the assignment of building lots. In the meantime, there was much to do to prepare the land for planting to stave off starvation. Fields were cleared and ditches were dug so crops would be ready for harvest in the spring, summer and fall. Fortunately, the weather cooperated, with mild temperatures remaining until Christmas.

Then on Christmas Day 1861, the rains began. Robert Gardner recorded in his journal the extent of the damage caused by 40 days of rain:

“…before it quit it got in a big hurry and let down all at once. It raised the streams of the Virgin and Santa Clara to mighty rivers. They ran away beyond their bounds, and carried away some of the best bottom land. The little settlement on the Clara Creek was all under water, and the people fled to the hills. The water was several feet deep in their little log houses. We went to their relief and took them our dancing tent for shelter. At the junction of the two streams great cottonwood trees came floating down, roots and limbs. It was said that a large anvil came down ahead of the blacksmith shop. A great many pieces of Hamblin’s grist mill were carried downstream for four miles. I helped to pick them up. The Virgin instead of being a narrow stream was in many places a quarter of a mile wide. We had gone to considerable work to level a ditch five miles along the banks of the Virgin, and spent much time in making a tunnel through a rocky point. Nearly all hands had worked at this canal most of the winter. In the spring we had to abandon this ditch for the river washed it away as fast as we made it.” (Thanks to Where Two Streams Meet by Lyman Hafen for this journal entry.)

When both the Virgin River and Santa Clara River reached flood stage, the Santa Clara Fort was destroyed, nearly costing Jacob Hamblin his life. Over in Washington, John D. Lee lost his mill. In Fort Harmony, two of Lee’s children were killed when a saturated wall fell and crushed them. Entire communities were swept away in the flooding, including Grafton and Tonaquint. Gunlock suffered severe damage.

Much has been written of the 40-day rain during the winter of 1861-1862. One example is that of  Samuel Stucki in Santa Clara. After he and his family arrived in November 1861 with the Swiss group from Salt Lake City, Samuel built a “wigwam” of reeds harvested from the Santa Clara river to provide some shelter for his family until he could build a more substantial covering. The 40-day rain washed away the wigwam, leaving his family of six exposed to the elements. Fortunately, Samuel’s brother, John, had a more solid shelter and he invited the family to stay until a replacement could be constructed.

In addition to the destruction of shelters and forts in the flooding, all the work invested in preparing the land for planting was washed away, including all the hand-dug irrigation ditches. Everything, all the work that had been done, had to be completed a second time.

The 40-day rain tragedy was the harbinger of what was to come over the next 30 years with attempts to control the rivers and manage irrigation. The early settlers had to rely on their own ingenuity and that of their neighbors to live in a land of the extremes of both drought and floods. Over and over dams were constructed to “tame” the unpredictable waters in this area but inevitably failed.

As late as 2005, floods continued to destroy homes and property. On a fateful day in January 2005, three elements combined to reek havoc on St. George and its surrounding communities. Heavy snow fall, warm rains, and denuded vegetation from previous summer fires caused both the Santa Clara River and the Virgin River to swell from their usual 5 cubic feet per second level to 6,500 cubic feet per second in mere hours. One person was killed and 25 homes swept downstream.